Eric Fry’s pick, FCX, is crushing the S&P … the tailwinds behind copper … why the current gains will likely pale compared to what’s coming

It was an “earnings surprise” according to Yahoo! Finance.

Perhaps for Yahoo! … but not for our macro specialist, Eric Fry, and his subscribers.

You see, Freeport McMoRan was Eric’s pick for the annual InvestorPlace Best Stock for 2020 contest.

And while the S&P is up just 6% on the year, Freeport McMoRan has nearly 5X’d that return, sitting on 37% gains — and that’s despite suffering a monster 60% drawdown in March.

What’s behind this strength?

You see, the tailwinds that have driven FCX 37% higher this year are still blowing with no sign of slowing down. And that means there are likely plenty more gains to come, even beyond this year’s stock-picking contest.

Let’s jump into those details.

This means he starts his investment analysis by looking at the big-picture forces that are driving global markets.

That could lead him to, say, a frontier-market stock … or possibly an opportunity in South American currencies … or in this case, a possible boom in commodities.

You see, Freeport McMoRan is a mining company — much of it focused on copper. So, as copper’s value rises and falls in the market, it has a substantial impact on FCX’s earnings.

Here’s Eric from his analysis of Freeport earlier this year:

The battery metal (copper) has delivered an electrifying performance since the steep March selloff — climbing from a four-year low near $2 a pound to a recent two-year high above $3.10 a pound.

So, what’s happening with copper, as well as other natural resources, that’s pushing market prices higher?

That leads us to something Eric has called a Commodities Supercycle.

***The Commodities Supercycle is powering FCX

Commodities work differently than stocks. So, when investing in this sector, it’s important to understand how their cycles play out.

These are called “supercycles.”

No two supercycles are identical. But they all share two distinct traits:

1. In their youth, they produce huge investment gains.

2. In their advanced years, they produce huge investment losses.

That’s why it’s so important to pay attention to them early on. They grow up so fast.

You can see the rise and fall of it below by looking at the TR/CC CRB Commodity Index (CRB).

Notice how CRB quadrupled between 1999 and 2008, only to then lose 77%, which completely erased all its prior Supercycle gains. 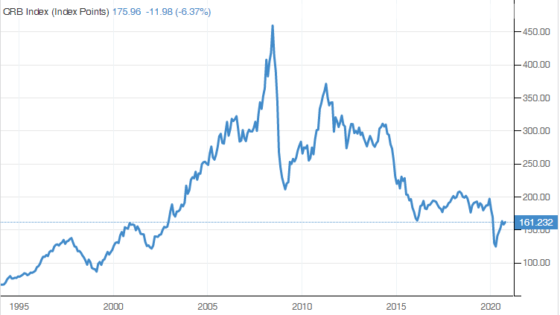 Obviously, without the benefit of hindsight, no one can be certain that this year’s commodity rally is the birth of a new supercycle.

But the devastating commodity bear market of the last decade was exactly the sort of event that creates conditions for a new bull market.

***Additional signs of a bull market in commodities

Regular Digest readers know that we believe electric cars will be one of the biggest trends of this decade. As electric, driverless cars become the norm, it will transform our day-to-day existence. In doing so, it will also transform the portfolios of wise investors who are aligned with this trend.

It turns out, copper is a much-needed part of the electric car growth story.

Copper is a major component in EVs used in electric motors, batteries, inverters, wiring and in charging stations.

A pure electric vehicle can contain more than a mile of copper wiring in its stator windings.

The publication goes on to write that electric vehicle sales growth will increase demand for copper by 1,700 kilotons by 2027.

You can get a sense for the enormity of that demand in the chart below.

This explosive growth makes sense when you contextualize the amount of copper needed for electric car manufacturing.

The Copper Development Association reports that conventional cars have 18-49 pounds of copper.

With that as a baseline, what’s your guess as to how much copper is in a hybrid electric vehicle?

And if we look at a pure, battery electric vehicle, the amount of copper used jumps to 183 pounds.

Given this 273%-916% increase in copper needed for electric vehicles compared to conventional cars, it’s easy to see why demand is poised to soar as our world continues to move away from gas-fueled cars.

Now, what’s key here is that while demand for copper is surging, supply isn’t there to meet the need.

… large supply deficits are also on the horizon, perhaps as early as next year.

The story is becoming all-too-familiar: Soaring new demand from EVs and other electrification technologies, coupled with stagnant global supply growth, is creating a supply deficit in the copper market.

Let’s put all of this together, tying it back to Freeport McMoRan’s “surprise” earnings.

This free cash flow generation will actually accelerate as we go forward into the fourth quarter, into 2021 …

Copper is absolutely essential and strategic to the technologies that the world is moving to transition to global clean energy future.

And more and more we’re seeing the adoption of policies both in community and governments, by companies to reduce carbon emissions. This initiative is no longer being debated as to whether it’s needed or not, but there is a real commitment now to accelerate.

And as a result of the steps that will be required to reduce carbon, the intensity of the use of copper in those application is really significant.

We are committed at Freeport to being a responsible producer of copper, which is a very favorable metal in terms of these positive ESG factors going forward.

***You’re not too late to get in on the trend

Commodities are finally rallying off a multi-year Supercycle low … the demand for copper is poised to skyrocket as the technologies of the future require it more and more … and FCX is one of the leading copper miners in the world.

From the looks of it, Eric’s subscribers are in for far more than 37% gains. That means if you haven’t taken a position in FCX yet, you’re not too late.

I’ll give Eric the final word:

Freeport-McMoRan is perfectly positioned to cash in on this decades-long boom.

Today, the stock is changing hands for around $17 a share. But as the battery metal boom continues to gain momentum over the next few years, I expect this stock to challenge its all-time high near $60 a share.

That makes Freeport a great copper play on the battery boom.

Have a good evening,

AAPL Stock: Apple Is Going to Get a Boost from the New M1 Processor

By Value Spots
25 mins ago

Cocrystal Pharma: 8 Things for COCP Investors to Know About the Biotech Stock

Carnival Stock Deals With More Setbacks, But Has a Promising Future

Mmtec, Inc: 9 Things for MTC Stock Investors to Know About the Company as it Soars 80%+ Today

AAPL Stock: Apple Is Going to Get a Boost from the New M1 Processor