Although cannabis firms have generally continued their streak of disappointment, there is a broader argument supporting the industry. Prior to the novel coronavirus pandemic, the “green” sector was one of the biggest job creators for the economy. Frankly, that’s exactly what we need, which initially makes GrowGeneration (NASDAQ:GRWG) intriguing. That is, until this one firm called Hindenburg Research started to take interest in GrowGeneration stock.

As a notorious short seller, Hindenburg is the bane of the perpetually optimistic. However, short sellers do their often-unappreciated service to the markets by providing a case for the bears. After all, if everybody bets on the same horse, the rewards if any will likely be minimal. Essentially, they are the other side of the equation that makes the formula work. Of course, in this case, that’s little comfort for those holding onto GrowGeneration stock.

That’s because this Hindenburg report is particularly damaging. Focusing on the executive team, the short seller lists multiple allegations to nefarious activities and entities. For example, the research paper states:

President & Co-Founder Michael Salaman was alleged by the FTC to have engaged in scheme to sell consumer credit card information without authorization. He has an extensive career in penny stock failures alongside his father, Abraham Salaman, a twice-convicted fraudster with ties to the mob.

The litany of unflattering – to say the least – associations goes on. Before you decide to buy GrowGeneration stock, I recommend you read what Hindenburg has to say. At the end of the day, it is your money.

To be fair, the company has blasted Hindenburg, accusing it of publishing false and defamatory statements. When you talk about family, I can understand the anger.

Naturally, I’m hesitant about suggesting a buy-and-hold idea in GrowGeneration stock. While the broader fundamentals are positive for cannabis – and that’s especially the case if the economy tanks due to the coronavirus – the timing of this accusation may stick.

True, Hindenburg is sometimes hit-or-miss with its research papers. But in this new normal where many new investors are liable to buy junk stocks, Hindenburg is more likely to be accurate in its negative prognostications. Now, please don’t send a hitman after me – I’m not saying that GRWG is junk. Rather, I’m pointing out the higher probability that some of these Covid high-flyers may not be completely on the up and up.

Nevertheless, it’s also worthy to note that Hindenburg didn’t dispute the dramatic growth that has underlined GrowGeneration stock. Indeed, the short seller stated that GRWG’s gardening business has enjoyed a coronavirus tailwind. Thus, for the risk-tolerant trader, there could be an opportunity here.

When I first examined the chart for GrowGeneration stock, I thought the price action looked familiar. Sure enough, I pulled up Landcadia Holdings II’s (NASDAQ:LCA) chart and the two, at different time intervals, shared a similar trend. 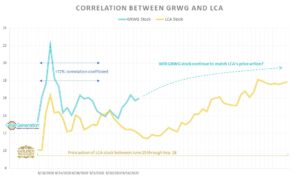 To confirm my suspicions, I ran a correlation analysis on both GRWG and LCA. I discovered that between Aug. 14 through Sept. 3, the price action of GRWG shared a 71.7% correlation coefficient with LCA’s price action between June 25 and July 16.

With such a strong direct relationship, it implies that for the time being, investors don’t really care about executive morals. As our own Will Ashworth stated recently, buying the special purpose acquisition company that is Landcadia is akin to bailing out a billionaire.

Don’t Put a Ring on It Yet

Now that I think about it, Landcadia’s ties to Las Vegas represents a great analogy about GrowGeneration stock. If you want to trade GRWG, have fun playing the possible continued correlation with LCA. Given that we are in the new normal, the sentiment that has catalyzed LCA could spill over to GRWG.

There are no guarantees but from a technical perspective, it’s a compelling story. But whatever you do, don’t put a ring on GrowGeneration yet.

First, the coronavirus crisis could worsen, which initially might seem like a positive for GRWG stock. With another round of lockdowns, bored people will seek coping mechanisms. That could mean cannabis, which could mean higher sales for GrowGeneration.

At the same time, we’re living in a very fragile global economy. So, a negative shock this time around could decimate consumer spending. That would be problematic for any business, particularly the non-essential ones. And don’t listen to government mandates – you can live without weed.

Second, Hindenburg’s accusations are nothing to scoff at. It’s not like the cannabis industry attracts ministry leaders – well, maybe that’s a bad example. But you get my point. Trade GRWG for nearer-term profits, yes, but let’s see where this ends up in the next few months before making a long-term commitment.

On the date of publication, Josh Enomoto did not have (either directly or indirectly) any positions in the securities mentioned in this article.

A former senior business analyst for Sony Electronics, Josh Enomoto has helped broker major contracts with Fortune Global 500 companies. Over the past several years, he has delivered unique, critical insights for the investment markets, as well as various other industries including legal, construction management, and healthcare.

Chase vs. Wells Fargo: Which Is Best for You?

By Value Spots
35 mins ago

What a Stopped Clock Can Teach You About Tesla Stock

7 Hot Energy Stocks with Value That You Shouldn’t Overlook

How to Handle Vehicle Repossession